The James Webb Space Telescope (JWST) successfully launched onboard an Ariane 5 rocket on December 25, 2021, at 12:20 UTC – a Christmas miracle for more than 1,000 contributing scientists, engineers, and technicians over the last 30 years. This global collaboration included NASA, partners, and contractors from at least 14 countries and 29 US states, including partner agencies European Space Agency (ESA) and the Canadian Space Agency (CSA).

A FreeFlyer 3D projection simulating the JWST halo orbit about the Sun-Earth L2 point with RLP X along the horizontal axis and RLP Y along the vertical axis.

The observatory orbits the second Sun-Earth Lagrange point (L2), collecting infrared data from planets, stars, nebulae, galaxies, and beyond – clueing scientists into the secrets of the cosmos. To carefully store the observatory in the Ariane 5 payload fairing, the structure is composed of multiple moving segments that fold like origami. The sunshield, several antennas, and an array of mirrors are just a few appendages of the craft that were folded into Ariane 5 and deployed while in space. 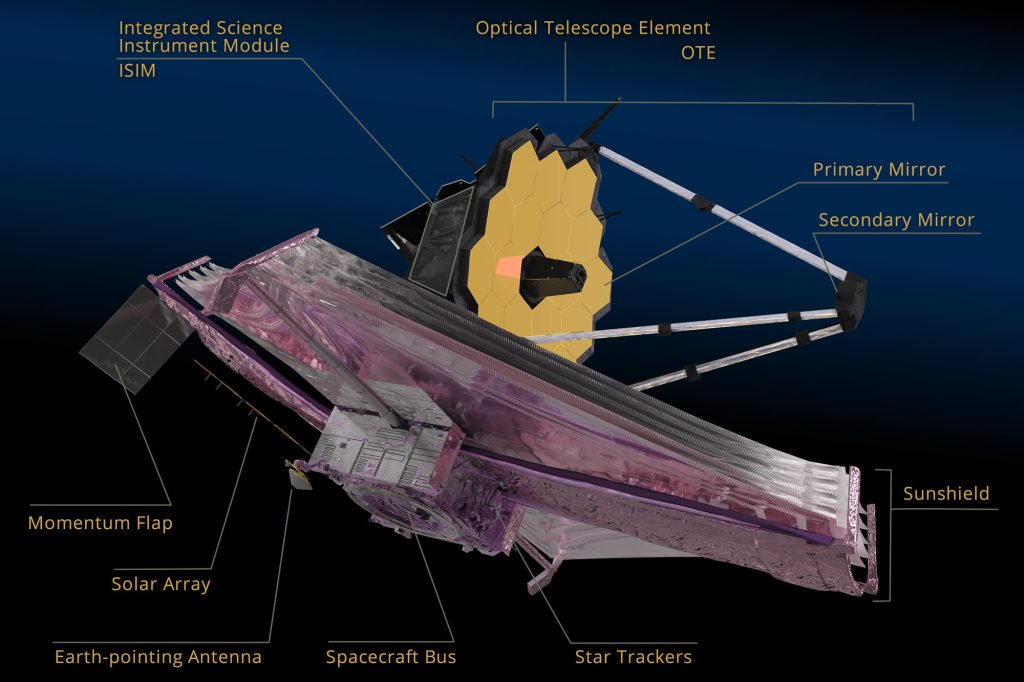 Artist rendering of JWST highlighting the telescope and other major hardware components.
NASA

a.i. solutions® currently supports JWST’s flight dynamics at NASA Goddard Space Flight Center (GSFC) on the Flight Dynamics Support Services (FDSS) III contract, but our company’s support of the mission has spanned nearly two decades, providing initial trajectory design, launch window and other prelaunch analyses, maneuver planning, operational support, and the development of the Flight Dynamics Ground System (FDGS).The FDGS software was developed by the Flight Dynamics Team to integrate a suite of tools into one accessible interface to support the life of the mission. These tools include maneuver planning, monitoring, reconstruction, and calibration, as well as contact analysis, slant range calculations, and orbit determination. Release 6 of the FDGS was completed eight days earlier than required and has been used to support pre-launch, launch, early orbit, and station-keeping operations of the JWST spacecraft. FreeFlyer 7.4.1 is used as the astrodynamics tool within FDGS for contact analysis and maneuver planning, reconstruction, and calibration. This version of FreeFlyer has remained consistent since FDGS’s conception to maintain consistency throughout development. Today, FreeFlyer 7.7.1 is available with many more robust capabilities such as flat plate SRP modeling, relative motion and constellation enhancements, as well as trajectory and maneuver optimization. 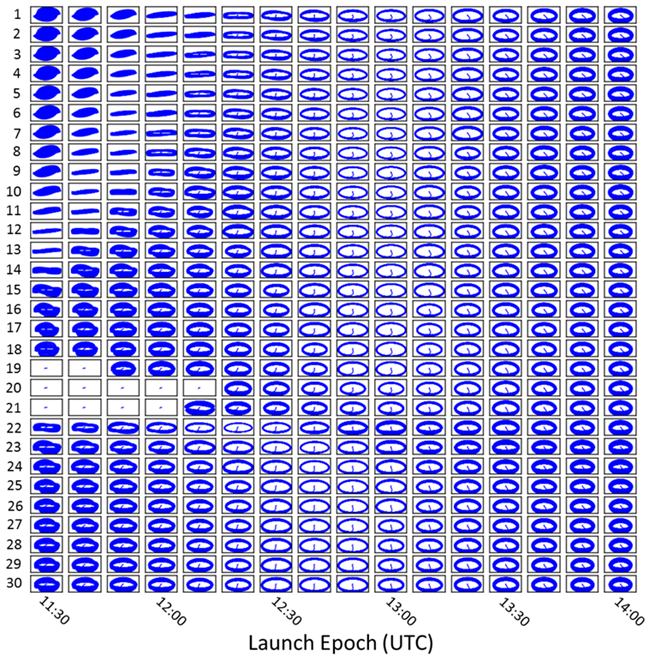 An example of the JWST launch window analysis at 10-minute increments between 11:30 and 14:00 UTC for each day in a 30-day month. The ephemerides used to plot the JWST trajectories traced in blue were generated by FreeFlyer. Each square shows the JWST trajectory propagated for 10 years with RLP Y along the horizontal axis and RLP Z along the vertical axis.

Beginning on launch day, the Flight Dynamics Team provided six days of 24-hour operational support at GSFC through the completion of the first two mid-course correction (MCC) maneuvers, MCC-1a and MCC-1b at Launch+12.5 hours and Launch+2.5 days, respectively. To mitigate the risk of an overburn scenario, which was critical because of the spacecraft’s inability to efficiently remove energy from its transfer orbit due to the configuration of its thrusters and limitations on its attitude, MCC-1a and MCC-1b were purposefully biased down to 93% of the delta-v magnitude required to reach the target science orbit. The MCC maneuvers were closely monitored in near real-time, giving the Flight Dynamics Team the ability to recommend an abort as a last line of defense against the risk of applying too much delta-v to the transfer orbit. These maneuvers were years in the making, as the team iterated on a careful balance of changing constraints and requirements. The main goal was to minimize fuel consumption, thereby allowing for the longest possible science mission, one that was planned for a minimum of 5.5 years with a goal of 10.5 years. These maneuvers were so well planned and executed that the current estimates of mission duration as a function of remaining fuel are “over 20 years.” A live NASA TV interview was held with Keith Parrish, the JWST Commissioning Manager, where he discussed the early stages of the mission and specifically the launch and maneuver results. During this interview, Mr. Parrish called out a “big shout out to our Flight Dynamics Team!”

Deployment of the folded JWST structure took place over the two weeks following the conclusion of MCC-1b. As the deployment of all parts of the JWST spacecraft completed successfully, the Flight Dynamics Team prepared for the final maneuver to place JWST into its desired science orbit about L2. This maneuver, MCC-2, was planned and executed flawlessly by the team at Launch+30 days, with JWST successfully achieving its target orbit about L2. Originally, MCC-2 was planned for execution at Launch+29 days, but due to the success of MCC-1a and MCC-1b, the project was able to delay MCC-2 to a more operator-friendly time without any significant impact to the mission lifetime. 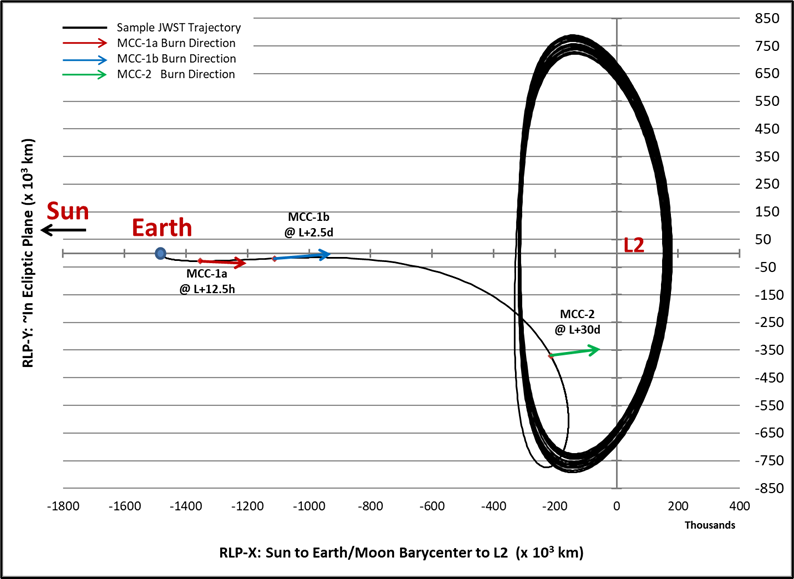 The burn direction of each Mid-Course Correction maneuver along the JWST trajectory to the final orbit about the Sun-Earth L2 point.

The Flight Dynamics Team then transitioned to daily support for the Commissioning Phase of the mission (Launch+30 days through Launch+180 days) and continues to perform orbit determination, station-keeping maneuver planning, and other analyses as necessary. During this period, the Flight Dynamics Team began the nominal 21-day station-keeping maneuver cadence designed to maintain the orbit about L2. The team has also started development for the final release of the FDGS before transitioning to the NASA GSFC Flight Dynamics Facility (FDF) for future maintenance and operational support. FDGS has performed so well that the methodology used for its development and maintenance has been recommended to the NASA GSFC Navigation and Mission Design Branch for future mission support.

To experience the power and flexibility of FreeFlyer for your next mission, register with an account at FreeFlyer.com and request a free, trial license today! Contact our tech support and sales team members for more information.