Recently, lunar Near Rectilinear Halo Orbits (NRHO) have been the focus of much study, and they have been selected as the target orbit for the Gateway mission, formerly the Deep Space Gateway. Also, the Deep Space Network (DSN) is increasingly congested and over-subscribed. In this work, the performance of relative-only navigation between a spacecraft in an NRHO and a relay in a Distant Retrograde Orbit is examined and compared to simulated DSN tracking using a Square Root Information Filter. Various tracking scenarios are examined using a closed-loop simulation where navigation errors inform maneuver planning and maneuver execution errors affect navigation performance. Results indicate that relative-only navigation can provide comparable levels of orbit determination error and orbit maintenance costs.

Lunar Near Rectilinear Halo Orbits (NRHOs) are currently the primary candidate for the target orbit for the Gateway mission, formerly known as the Deep Space Gateway.1, 2 The NRHO orbit class is selected because it exhibits several useful advantages for human spaceflight.3 These include low orbit maintenance costs, low orbit insertion costs, low orbit transfer costs, and resonant periods that minimize shadowing and communications blockages. Each of these characteristics has been examined in previous works.3-5

Construction and usage of the Gateway, a maneuverable, habitable lunar-orbit staging vehicle for deep space missions, will occur over multiple missions and will contain phases of crewed activity and uncrewed, quiescent operations.6, 7 As such, any orbit maintenance or navigation analysis should incorporate the dynamical disturbances associated with both phases. The uncrewed phase will generally be more quiescent than the crewed phases, as the main orbit disturbances will be momentum unload and orbit maintenance maneuvers (OMM). However, during crewed phases, more orbit disturbances are introduced by the added impacts of human activity. These disturbances are events like CO2 and waste dumps, additional momentum unloads, and attitude slews. These disturbances can be frequent and unplanned, and occur at varying time intervals, making them potentially difficult to model for navigation.

Typically, missions such as Gateway rely on the Deep Space Network (DSN) for tracking; however as of 2015, the DSN supported about 40 deep-space missions and was routinely oversubscribed by about 30%. This demand translates to about 500 hours of over-subscription per week, roughly equivalent to the work of four (4) additional antennas.8 Furthermore, there are currently six (6) more missions to Mars (comprising nine (9) spacecraft) planned for the 2020 launch window, creating an unprecedented level of demand.9 In an attempt to alleviate the expected congestion, the DSN has implemented the Multiple Spacecraft Per Antenna (MSPA) technique, allowing for shared antenna time. However, this is restricted to spacecraft within the same beam-width and all secondary spacecraft are limited to downlink only.10 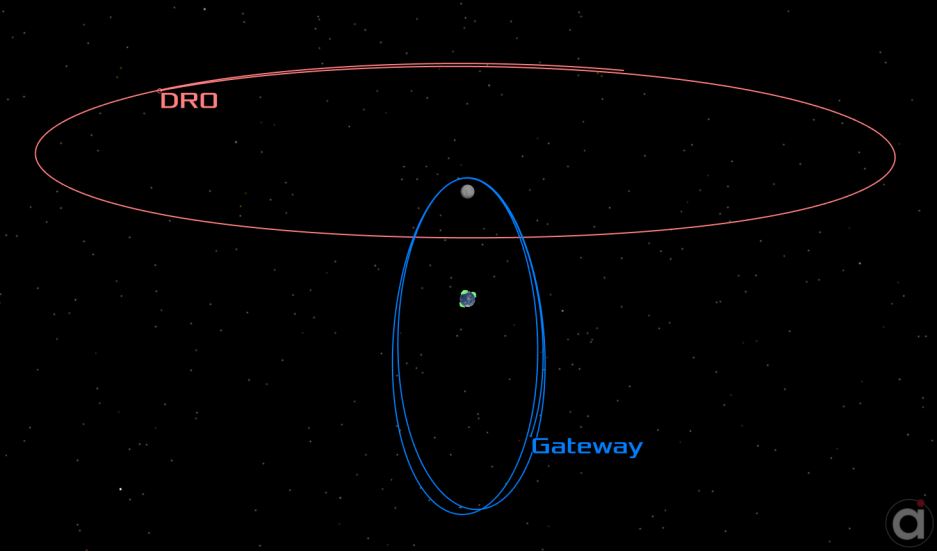 The DRO is selected as the relay orbit because it provides at least one distinct advantage for alleviating the burden on the DSN. The stability of the orbit allows for (almost) no OMMs.15, 16 With no OMMs and an autonomous relative navigation strategy, ground based tracking and telemetry can be minimized to vehicle state-of-health information. These telemetry links can be provided by alternatives to the DSN, such as the Universal Space Network (USN).

The 9:2 resonant NRHO-DRO orbit pairing does not preclude line-of-sight blockages by the Moon. However, the resonant nature of the NRHO does help to provide stable, predictable behavior in this regard. Over the course of one year, the pairing goes through three different ”eclipse” seasons of blockages between the two spacecraft. From the geometry, the lunar blockages only occur when the DRO is near its maximum Y-amplitude (in rotating coordinates) and the NRHO is near the opposite ascending/descending node. Due to the elongation of the NRHO, a spacecraft moves quickly through the plane of the DRO. This means that each blockage is relatively short in duration, typically an hour or so. In total, the amount of blockage time is minimal, totaling only about 14 hours per year. See Figure 2 for a plot of the accumulated blockage time over the course of one year. This analysis covers the time period that incorporates the first set of blockages in the March/April time-frame. 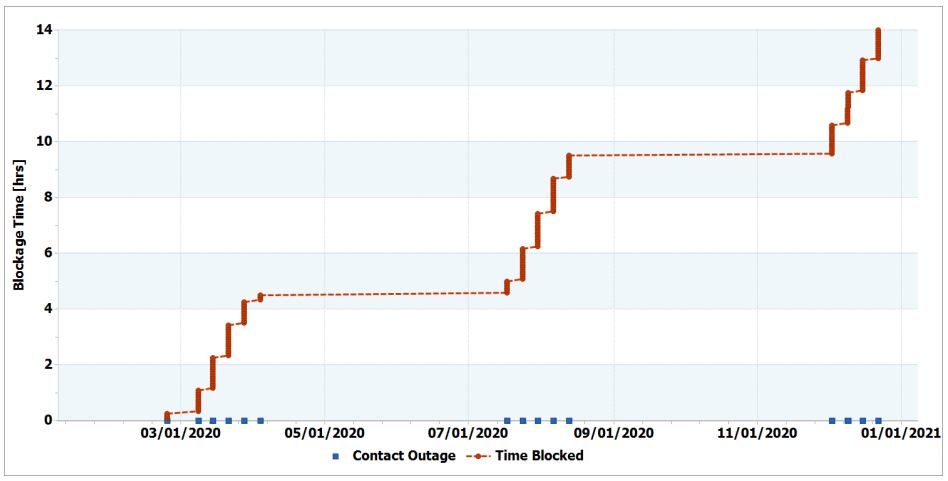 Figure 2: Cumulative NRHO and DRO Contact Outages Over One Year

For Gateway, one method of orbit maintenance under study is a receding-horizon approach for x-axis crossing control.5, 17 Initially, a periodic NRHO in the Circular Restricted Three Body model is used to target a quasi-periodic NRHO in a higher-fidelity ephemeris force model. The resulting quasi-periodic orbits have been extended up to 15 years in duration, and are used as a source of targeting conditions for orbit maintenance maneuvers (OMMs). The receding-horizon approach then targets the reference Rotating Libration Point (RLP) frame x-velocity at periapsis multiple revolutions ahead of the maneuver planning state. These reference trajectories have been generated under both uncrewed and crewed orbital conditions.4

To learn more, you can read our white paper “Examining the Feasibility of Relative-Only Navigation for Crewed Missions to Near Rectilinear Halo Orbits” 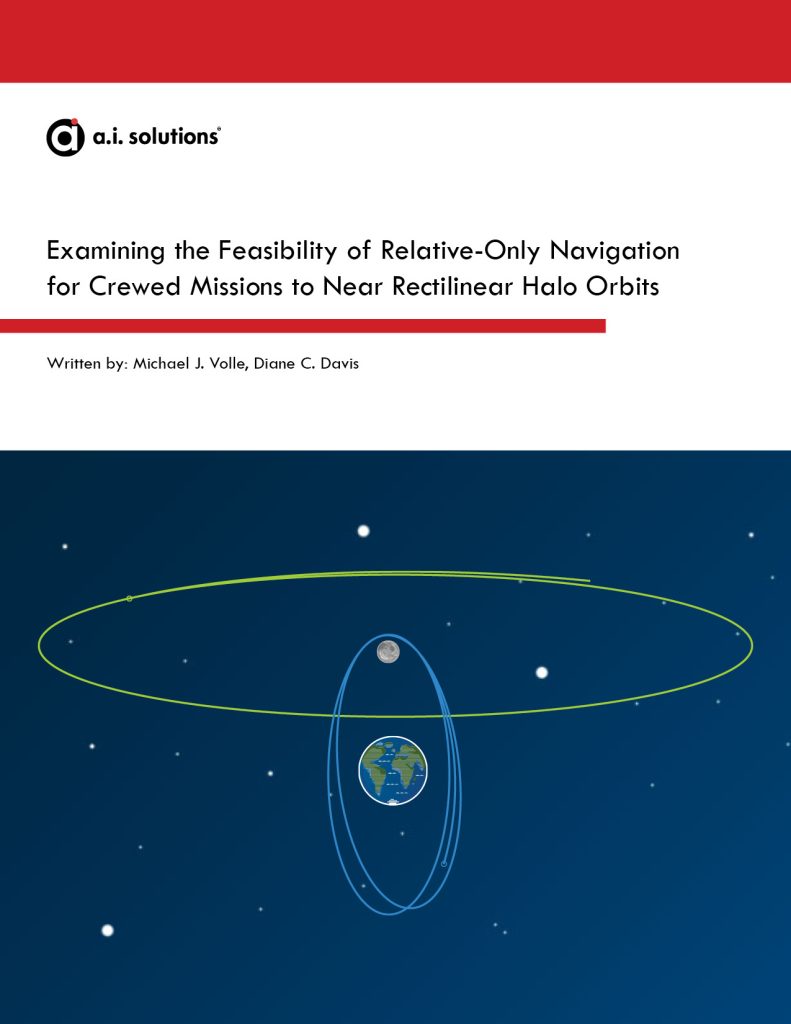