How did DSCOVR transfer from the collapsing phase into the expansion phase of the Lissajous orbit?

DSCOVR (Deep Space Climate Observatory) is a National Oceanic and Atmospheric Administration (NOAA) space weather, space climate, and Earth observation satellite operating in a Sun-Earth L1 Lissajous orbit. This report summarizes the two-burn maneuver campaign performed in Summer 2021 to transfer DSCOVR from the collapsing phase into the expansion phase of the Lissajous orbit to avoid the Solar Exclusion Zone (SEZ). The two-maneuver campaign performed in July and August 2021 was successful and resulted in saving the mission 31 kilograms of fuel and 100 m/s of delta-v reserved for SEZ maneuvers which are no longer required until 2026 or 2027.

DSCOVR (Deep Space Climate Observatory) is a National Oceanic and Atmospheric Administration (NOAA) space weather, space climate, and Earth observation satellite operating in a SunEarth L1 Lissajous orbit such that the orbit track never extends beyond 15 degrees from the EarthSun line. Launched on February 11, 2015 out of Cape Canaveral, FL on a Falcon 9, the Lissajous orbit insertion maneuver placed DSCOVR into the expansion phase of the Lissajous orbit just outside of the 4-degree Solar Exclusion Zone (SEZ) to maximize the time outside of the SEZ.1

Beginning in October 2020 SEZ maneuvers were performed once every three months to keep DSCOVR in the collapsing phase of the Lissajous orbit just prior to violation of the SEZ1 The location of each SEZ maneuver was at or near when the z-velocity in the rotating libration point (RLP) frame was close to zero. This corresponded to the northern and southern extremes of the Lissajous orbit relative to the ecliptic plane. The SEZ maneuvers were directed towards the South Ecliptic Pole (SEP) and North Ecliptic Pole (NEP) for burns located in the northern and southern point of the orbit, respectively. The same SEZ avoidance strategy was performed by ACE (Advanced Composition Explorer) between 1999 and 2001 but was later abandoned in 2001 to save fuel for a longer extended mission.2 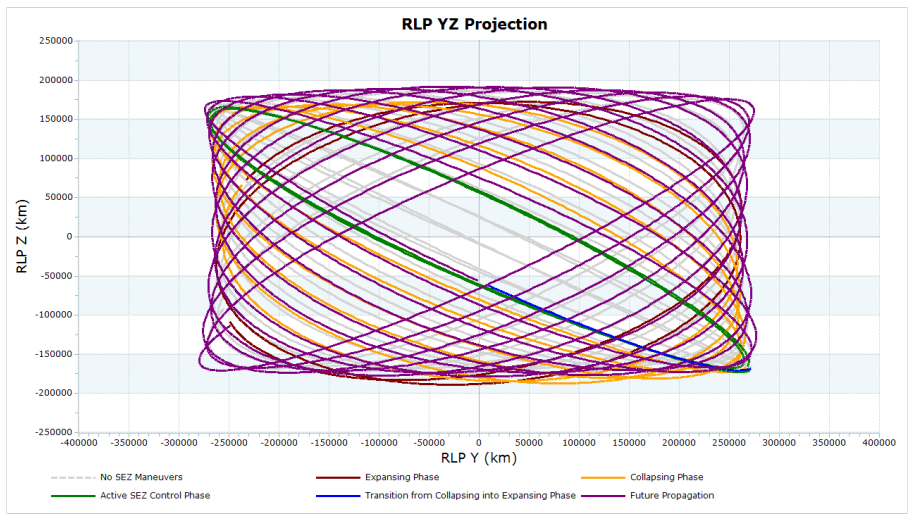 Figure 1. RLP YZ projection for DSCOVR from 2017 projected out to 2027. Maroon, orange, and green represent definitive ephemeris history starting in the expansion phase in maroon, the collapsing phase in orange, and the SEZ control phase in green. The blue region is the transition from the collapsing phase into expansion phase that will be discussed in this paper while the purple region is the long-term propagation to show the successful transition to the expansion phase. The light gray region is a forward propagation if no active SEZ control were performed. 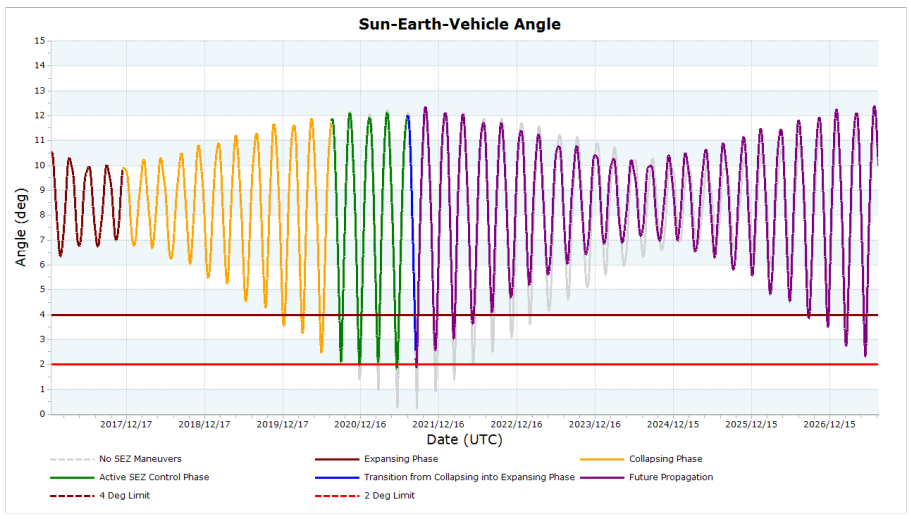 Figure 2. SEV angle history for DSCOVR from 2017 projected out to 2027. The same color scheme from Figure 1 is used for Figure 2.

Originally the SEZ maneuvers for DSCOVR were intended to maintain a 4-degree Sun-EarthVehicle (SEV) angle minimum but were updated to a 2-degree target. This was due to a delay caused by the shortened lifespan of the miniature inertial measurement unit (MIMU). NOAA and NASA engineers developed a modified attitude control system (ACS) to operate with the star tracker as the sole sensor for normal operations. Thruster operations were a major challenge for the star tracker (ST) only ACS system; burns had to be performed more slowly to allow the star tracker to maintain lock on stars and to limit input torques since the Reaction Wheel Assembly (RWA) was the only ACS actuator. As the engineering team gained experience and additional data, the team was able to develop scripts to conduct extended thruster burns to accommodate the new ACS operations. These longer burns were approximately fifteen times longer compared to when the MIMU was available. With this additional experience, the DSCOVR team felt comfortable executing the longer burns required for the SEZ maneuver.

The implementation of the SEZ avoidance strategy is visible in the green curve in Figure 1 which shows an RLP-YZ projection of the orbit between 2017 and 2027 along with Figure 2 which shows the SEV angle across the same time span. The maroon, orange, and green curves represent definitive ephemeris history starting in the expansion phase in maroon, the collapsing phase in orange, and the active SEZ control phase in green. Figure 2 shows the SEV angle being controlled to the 2-degree target during the green phase. The cost of each SEZ maneuver was approximately 6-7 meters/second (m/s) leading to a yearly cost of approximately 24-28 m/s. Continuing this threemonth cadence indefinitely, along with routine station-keeping maneuvers, would consume the remaining propellant by 2030 or 2031.

The focus of this paper is to outline the investigation that began in the Fall of 2020 to determine the possibility of performing a series of maneuvers to place DSCOVR directly into the expansion phase of the Lissajous orbit just beyond the SEZ. The results of the paper showed that a two-maneuver campaign in the Summer of 2021 was sufficient to place DSCOVR directly into the expansion phase of the Lissajous orbit. The two-maneuver sequence was composed of a departure burn and an insertion burn. The departure burn was applied at or near RLP-Z velocity component of zero which placed DSCOVR on a transfer arc between the collapsing phase and expansion phase of the Lissajous orbit. The follow-on insertion burn was performed at or near the next crossing of the RLP-XZ plane (RLP-Y = 0) to adjust the velocity vector to the desired components. The maneuvers were successfully performed in July and August 2021 and the results and success of each maneuver are covered in detail. Overall, the cost of the two maneuvers was 32.44 m/s, which is slightly larger than a year’s worth of SEZ maneuvers. This saved the mission approximately 100 m/s over the next four years and simplified operations as SEZ maneuvers were no longer required until 2026 or 2027. 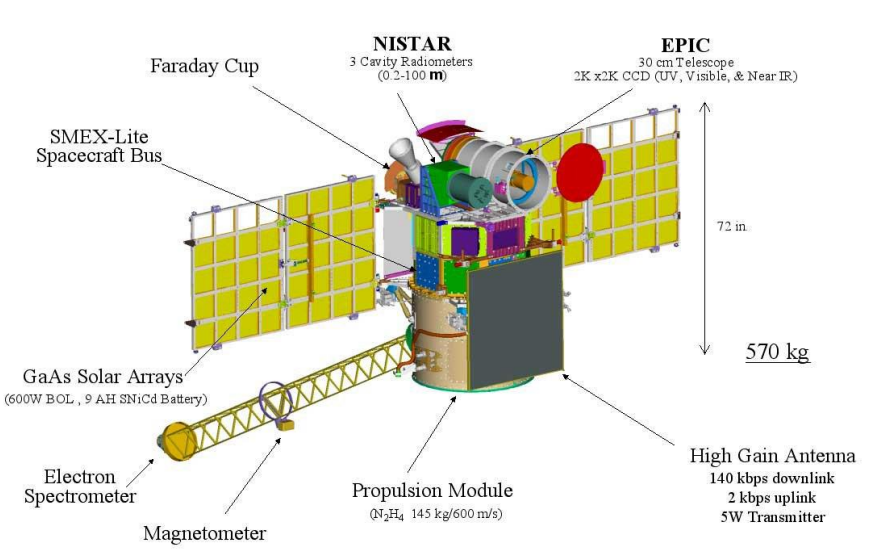 Figure 3. Visual overview of DSCOVR including the instrument suite. 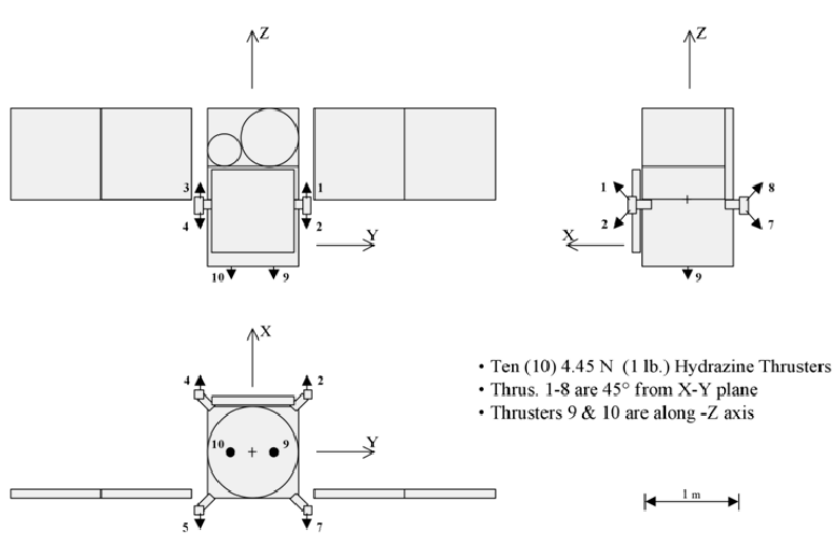 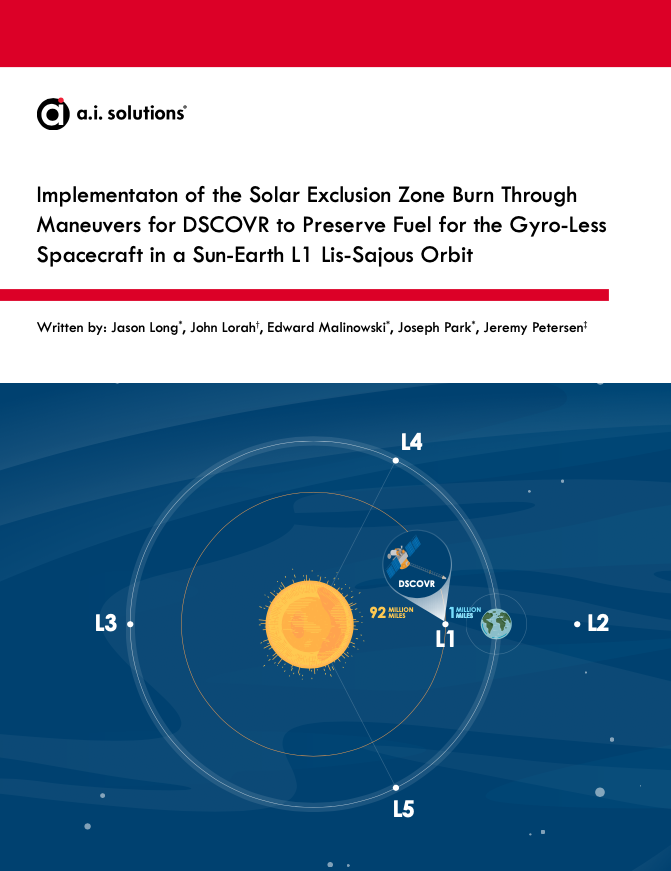